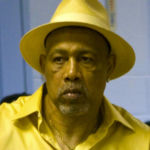 Why Is Ken Norton Influential?

According to Wikipedia, Kenneth Howard Norton Sr. was an American professional boxer who competed from 1967 to 1981, and held the WBC world heavyweight championship in 1978. He is best known for his fights with Muhammad Ali, in which Norton won the first by split decision, lost the second by split decision, and lost the final by a controversial unanimous decision. Norton also fought a slugfest with Larry Holmes in 1978, narrowly losing a split decision.

Other Resources About Ken Norton

What Schools Are Affiliated With Ken Norton?

Ken Norton is affiliated with the following schools: