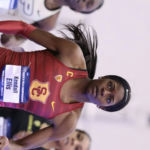 Why Is Kendall Ellis Influential?

According to Wikipedia, Kendall Ellis is an American sprinter. Ellis won gold in the 4x400 m relay and bronze in the Mixed 4x400 metres at the Tokyo Olympics. She competed in the 400 meters at the 2017 and 2019 World Championships, winning gold medals as a part of prelim 4×400 m relays. As a junior, Ellis took gold in the 4×400 m relay and bronze in the 400 meters at the 2015 Pan American Junior Championships.

Other Resources About Kendall Ellis

What Schools Are Affiliated With Kendall Ellis?

Kendall Ellis is affiliated with the following schools: