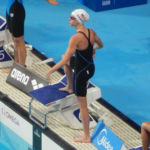 Why Is Kendyl Stewart Influential?

According to Wikipedia, Kendyl Stewart is an American competitive swimmer who specializes in backstroke and butterfly events. Career Stewart attends the University of Southern California, where she is a member of the USC Trojans swimming and diving team. At the NCAA Championships, she placed third in the 100 yard butterfly in 2015 and 4th in the 200 yard backstroke in 2013. She won a bronze medal for her prelims swim in the 4 × 100 m medley relay at the 2013 Summer Universiade .

Other Resources About Kendyl Stewart

What Schools Are Affiliated With Kendyl Stewart?

Kendyl Stewart is affiliated with the following schools: