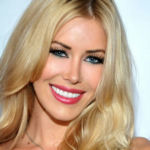 Why Is Kennedy Summers Influential?

According to Wikipedia, Kennedy Summers is a German-born American model, actress and stock trader. She was Playboy Playmate of the Year in 2014. Early life Summers was born in Berlin, to a military family, and raised in Hampton, Virginia. Her father served in the United States Army and her mother was a Russian linguist and cryptographer. Summers is also multilingual.

Other Resources About Kennedy Summers

What Schools Are Affiliated With Kennedy Summers?

Kennedy Summers is affiliated with the following schools: