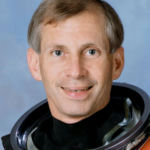 Why Is Kenneth Cockrell Influential?

According to Wikipedia, Kenneth Dale "Taco" Cockrell is a retired American astronaut, engineer and a veteran of five Space Shuttle missions. He served as Chief of the Astronaut Office from 1997 to 1998. Pre-NASA career Cockrell was born in Austin, Texas to Buford Dale Cockrell and Jewell Moorman. He graduated from Rockdale High School in nearby Rockdale, Texas in 1968. He earned a bachelor's degree in mechanical engineering from the University of Texas at Austin in 1972 and received his commission in the United States Navy that same year. He also earned a master's in aeronautical systems from the University of West Florida in 1974. He was trained as a pilot and was stationed from 1975 to 1978 aboard the aircraft carrier . Cockrell then became a test pilot for several years before serving two tours of duty aboard . In 1987, Cockrell resigned from the Navy and joined the Aircraft Operations Division of Johnson Space Center as a research pilot.

Other Resources About Kenneth Cockrell

What Schools Are Affiliated With Kenneth Cockrell?

Kenneth Cockrell is affiliated with the following schools: