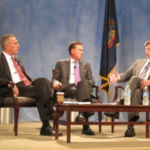 Why Is Kenneth Melani Influential?

According to Wikipedia, Kenneth R. Melani is the former president and chief executive officer of Highmark, a health insurance company based in Pittsburgh and the largest health insurer in Pennsylvania. Before his abrupt departure from Highmark in 2012, he was one of the most powerful health insurance executives in the country. At his peak in 2012, Melani was in charge of a Highmark that was $14.6 billion company and had millions of policyholders, for which he was paid $4 million annually.

Other Resources About Kenneth Melani

What Schools Are Affiliated With Kenneth Melani?

Kenneth Melani is affiliated with the following schools: