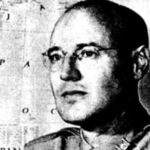 Why Is Kenneth Nichols Influential?

According to Wikipedia, Major General Kenneth David Nichols , also known by Nick, was an officer in the United States Army, and a civil engineer who worked on the secret Manhattan Project, which developed the atomic bomb during World War II. He served as Deputy District Engineer to James C. Marshall, and from 13 August 1943 as the District Engineer of the Manhattan Engineer District. Nichols led both the uranium production facility at the Clinton Engineer Works at Oak Ridge, Tennessee, and the plutonium production facility at Hanford Engineer Works in Washington state.

Other Resources About Kenneth Nichols

What Schools Are Affiliated With Kenneth Nichols?

Kenneth Nichols is affiliated with the following schools: