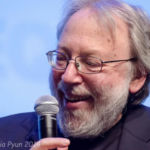 Why Is Kenneth Turan Influential?

According to Wikipedia, Kenneth Turan is an American retired film critic, author, and lecturer in the Master of Professional Writing Program at the University of Southern California. He was a film critic for the Los Angeles Times from 1991 until 2020 and was described by The Hollywood Reporter as "arguably the most widely read film critic in the town most associated with the making of movies".

Other Resources About Kenneth Turan

What Schools Are Affiliated With Kenneth Turan?

Kenneth Turan is affiliated with the following schools: