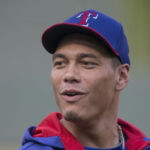 Why Is Keone Kela Influential?

According to Wikipedia, Keone Cole Kela is an American professional baseball pitcher for the San Diego Padres of Major League Baseball . He previously played for the Texas Rangers and Pittsburgh Pirates.Early life Kela attended Carson Senior High School in Carson, California, and graduated from Chief Sealth High School in Seattle, Washington. He was chosen by the Seattle Mariners in the 29th round of the 2011 MLB draft, but did not sign and enrolled at Everett Community College, where he played college baseball as a center fielder for one season.

Other Resources About Keone Kela

What Schools Are Affiliated With Keone Kela?

Keone Kela is affiliated with the following schools: