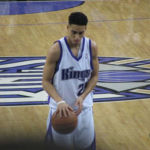 Why Is Kevin Martin Influential?

According to Wikipedia, Kevin Dallas Martin Jr. is an American retired professional basketball player who played 12 seasons in the National Basketball Association . He played college basketball for Western Carolina University, where in his junior year, he averaged 24.9 points per game, which ranked second in the nation. After three years at Western Carolina, he entered the 2004 NBA draft and was selected with the 26th overall pick by the Sacramento Kings.

Other Resources About Kevin Martin

What Schools Are Affiliated With Kevin Martin ?

Kevin Martin is affiliated with the following schools: