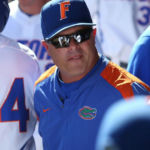 Why Is Kevin O'Sullivan Influential?

According to Wikipedia, Kevin Michael O'Sullivan is an American college baseball coach and former player. O'Sullivan is the current head coach of the Florida Gators baseball team of the University of Florida. O'Sullivan is best known for leading the Gators to the program's first College World Series national championship win in 2017. O'Sullivan also led the program to three consecutive appearances in the College World Series from 2010 to 2012 and four consecutive appearances from 2015 to 2018. He became the winningest coach in program history in 2021, surpassing Dave Fuller's 1975 record of 557 wins.

Other Resources About Kevin O'Sullivan

What Schools Are Affiliated With Kevin O'Sullivan ?

Kevin O'Sullivan is affiliated with the following schools: