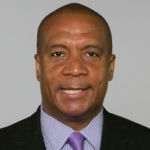 Commissioner of the Big Ten Conference

Why Is Kevin Warren Influential?

According to Wikipedia, Kevin Fulbright Warren is an American attorney and sports executive. He is the Commissioner of the Big Ten Conference. The first Commissioner who is African-American, he is also the first in any of the major American student-sports conferences in history. Warren was previously the Chief Operating Officer of the Minnesota Vikings of the National Football League, and was the highest-ranking African-American executive working on the business side for an NFL team. In 2015, Warren became the first African-American Chief Operating Officer of an NFL team. On June 4, 2019, Warren was elected as the Big Ten Conference Commissioner, effective January 2020.

Other Resources About Kevin Warren

What Schools Are Affiliated With Kevin Warren?

Kevin Warren is affiliated with the following schools: