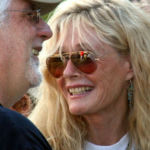 Why Is Kim Carnes Influential?

According to Wikipedia, Kim Carnes is an American singer and songwriter. Born and raised in Los Angeles, California, she began her career as a songwriter in the 1960s, writing for other artists while performing in local clubs and working as a session background singer with the famed Waters sisters . After she signed her first publishing deal with Jimmy Bowen, she released her debut album Rest on Me in 1971. Carnes' self-titled second album primarily contained self-penned songs, including her first charting single "You're a Part of Me", which reached No. 35 on the Billboard Adult Contemporary chart in 1975. In the following year, Carnes released Sailin', which featured "Love Comes from Unexpected Places". The song won the American Song Festival and the award for Best Composition at the Tokyo Song Festival in 1976.

Other Resources About Kim Carnes

What Schools Are Affiliated With Kim Carnes?

Kim Carnes is affiliated with the following schools: