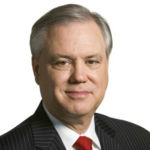 Why Is Kim Holmes Influential?

According to Wikipedia, Kim R. Holmes is an author and former American diplomat and Assistant Secretary of State. From 2002 to 2005 he served as the United States Assistant Secretary of State for International Organization Affairs; he was also Executive Vice-President of the Heritage Foundation, having served twice as the foundation’s Vice President of Foreign and Defense Policy Studies and Director of its Kathryn and Shelby Cullom Davis Institute for International Studies between 1992 and 2012.

Other Resources About Kim Holmes

What Schools Are Affiliated With Kim Holmes?

Kim Holmes is affiliated with the following schools: