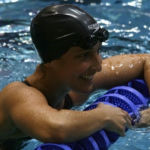 Why Is Kim Vandenberg Influential?

According to Wikipedia, Kimberly Vandenberg is an American competition swimmer and Olympic medalist. Vandenberg grew up in Moraga, California, and swam for Campolindo High School and Orinda Aquatics. She was a member of the bronze medal-winning U.S. team in the women's 4×200-meter freestyle relay at the 2008 Summer Olympics in Beijing, swimming in the preliminary heats of the relay event. She also won silver medals at the 2005 World University Games, and at the 2007 World Swimming Championships in the women's 200-meter butterfly. Four years later, she won a gold medal in the same event at the 2011 Pan American Games in Guadalajara.

Other Resources About Kim Vandenberg

What Schools Are Affiliated With Kim Vandenberg?

Kim Vandenberg is affiliated with the following schools: