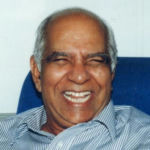 According to Wikipedia, Kunnath Puthiyaveettil Padmanabhan Nambiar DIC , FIEE , CEngg , more popularly known as K.P.P. Nambiar , was an Indian industrialist and technocrat, known for his work in the field of industrial development and technology. He was awarded Padma Bhushan by Government of India for his contributions to the field of technology in 2006.

What Schools Are Affiliated With K. P. P. Nambiar?

K. P. P. Nambiar is affiliated with the following schools: