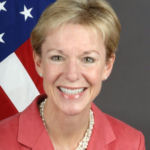 Why Is Kristie Kenney Influential?

According to Wikipedia, Kristie Anne Kenney is a former senior U.S. diplomat who served as the 32nd Counselor of the United States Department of State from 2016 to 2017. She is a recipient of the Secretary of State's Distinguished Service Award and held the nation's highest diplomatic rank of Career Ambassador in the United States Foreign Service. She served as the Department of State Transition Coordinator for the 2016-17 Transition.

Other Resources About Kristie Kenney

What Schools Are Affiliated With Kristie Kenney?

Kristie Kenney is affiliated with the following schools: