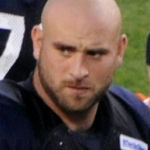 Why Is Kyle Long Influential?

According to Wikipedia, Kyle Howard Long is an American football guard who is a free agent. The son of Pro Football Hall of Fame defensive end Howie Long and the younger brother of former defensive end Chris Long, he played college football at Oregon following stints with Florida State and Saddleback. He was selected in the first round of the 2013 NFL Draft by the Chicago Bears, where he played his first seven seasons.

Other Resources About Kyle Long

What Schools Are Affiliated With Kyle Long?

Kyle Long is affiliated with the following schools: