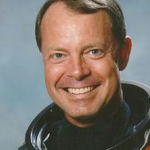 Why Is L. Blaine Hammond Influential?

According to Wikipedia, Lloyd Blaine Hammond Jr. is a Gulfstream test pilot, a former United States Air Force officer, and a former NASA astronaut. He flew on two Space Shuttle missions. Education Hammond was born on January 16, 1952, in Savannah, Georgia, but considers St. Louis, Missouri his hometown. He graduated from Kirkwood High School in 1969 and received a Bachelor of Science degree in engineering, science, and mechanics from the United States Air Force Academy in 1973 and a Master of Science degree in engineering science and mechanics from Georgia Institute of Technology in 1974. He is a member of the Air Force Academy Association of Graduates, the Air Force Association, and the Order of Daedalians.

Other Resources About L. Blaine Hammond

What Schools Are Affiliated With L. Blaine Hammond?

L. Blaine Hammond is affiliated with the following schools: