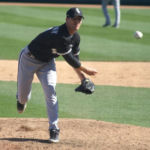 Why Is Lance Broadway Influential?

According to Wikipedia, Lance Daniel Broadway is an American actor and former Major League Baseball pitcher. He is 6'3" and throws right-handed. High school and college Broadway was born in Bryan, Texas, and attended Grand Prairie High School, where he was an all-district performer all three of his years on the varsity team. He transferred from Grand Prairie after his junior year and attended Waxahachie High. He played with former high-school All-State player Ben Hudspeth.

Other Resources About Lance Broadway

What Schools Are Affiliated With Lance Broadway?

Lance Broadway is affiliated with the following schools: