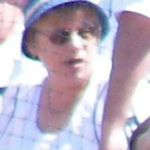 Why Is Larry Parrish Influential?

According to Wikipedia, Larry Alton Parrish is a former Major League Baseball third baseman and manager. Parrish played with the Montreal Expos , Texas Rangers , and Boston Red Sox . He also played two seasons in Japan for the Yakult Swallows and the Hanshin Tigers . Later, he served as manager of the Detroit Tigers .

Other Resources About Larry Parrish

What Schools Are Affiliated With Larry Parrish?

Larry Parrish is affiliated with the following schools: