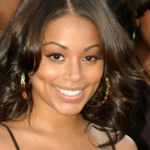 Why Is Lauren London Influential?

According to Wikipedia, Lauren Nicole London is an American actress. Beginning her career in music videos and later moving into film and television acting, London earned recognition and rose to fame for her performance as Erin "New New" Garnett in the 2006 coming-of-age film ATL. She appeared in the 2007 American Christmas film This Christmas, as well as the television shows 90210 and Entourage, and as Kiera Whitaker on the BET comedy-drama, The Game. London was a spokesmodel for Sean Combs's Sean John collection in 2007.

Other Resources About Lauren London