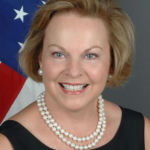 Why Is Laurie S. Fulton Influential?

According to Wikipedia, Laurie Susan Fulton is an American attorney, diplomat and the former United States Ambassador to Denmark. She was sworn in on July 15, 2009, and presented her credentials to the Queen of Denmark on August 3, 2009. She resigned effective February 15, 2013. In March 2013, she returned to Williams & Connolly LLP until July 2014.

Other Resources About Laurie S. Fulton

What Schools Are Affiliated With Laurie S. Fulton?

Laurie S. Fulton is affiliated with the following schools: