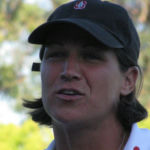 Why Is Lea Maurer Influential?

According to Wikipedia, Lea Loveless Maurer , née Lea E. Loveless, is an American former competition swimmer, Olympic champion, and former college swimming coach. She represented the United States at the 1992 Summer Olympics in Barcelona, Spain, where she won a gold medal swimming the backstroke leg of the women's 4×100-meter medley relay. She also won a bronze medal in the 100-meter backstroke. She was the head coach of the Stanford University women's swimming and diving team from 2005 to 2012.

Other Resources About Lea Maurer

What Schools Are Affiliated With Lea Maurer?

Lea Maurer is affiliated with the following schools: