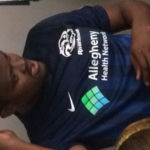 Why Is Lebogang Moloto Influential?

According to Wikipedia, Lebogang "Lebo" Moloto is a South African football player who currently plays for FC Tulsa in the USL Championship. Career Youth and college Moloto moved to the United States to play college soccer at Lindsey Wilson College in 2009. Moloto was offered a scholarship after his coach at Lindsey Wilson saw him in an international youth tournament in Cape Town at age 16. Moloto went on to play for the Blue Raiders for four seasons, amassing 42 goals and 20 assists in 83 career matches. Moloto won multiple individual and club honors including being named an NAIA All-American each season and winning the NAIA Most Outstanding Offensive Player award as a freshman. The team also won two national titles with Moloto as a member.

Other Resources About Lebogang Moloto

What Schools Are Affiliated With Lebogang Moloto?

Lebogang Moloto is affiliated with the following schools: