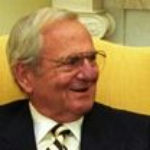 Why Is Lee Iacocca Influential?

According to Wikipedia, Lido Anthony "Lee" Iacocca was an American automobile executive best known for the development of the Ford Mustang and Ford Pinto cars while at the Ford Motor Company in the 1960s, and for reviving the Chrysler Corporation as its CEO during the 1980s. He was president and CEO of Chrysler from 1978 and chairman from 1979, until his retirement at the end of 1992. He was one of the few executives to preside over the operations of two of the Big Three automakers.

Other Resources About Lee Iacocca

What Schools Are Affiliated With Lee Iacocca?

Lee Iacocca is affiliated with the following schools:

What Are Lee Iacocca's Academic Contributions?

Lee Iacocca has made the following academic contributions: