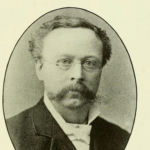 Why Is Leon F. Harvey Influential?

According to Wikipedia, Leon F. Harvey was an American entomologist, physician, and dentist. He was a founding member of the Buffalo Society of Natural Sciences, serving as its first treasurer and later as its president.Early life and education Harvey was born in Buffalo in 1837. He completed his medical education at Thomas Jefferson University in 1859, and practiced medicine and dentistry in Baltimore and Buffalo. For several years he managed a provident dispensary in Buffalo. He was an avid amateur entomologist and published scientific articles on the butterflies and moths of North America, including descriptions of new species, such as the white flower moth.

Other Resources About Leon F. Harvey

What Schools Are Affiliated With Leon F. Harvey?

Leon F. Harvey is affiliated with the following schools: