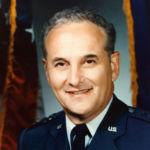 Director of the Defense Intelligence agency

Why Is Leonard H. Perroots Influential?

According to Wikipedia, Leonard Harry Perroots, Sr., USAF was Director of the Defense Intelligence Agency from October 1985 to December 1988. He retired January 1, 1989. In 1989, he was hired by Donald Mayes to become president of Vector Microwave Research Corporation, an enterprise performing tasks and dealings for the CIA and the U.S. military. While serving as assistant chief of staff for the U.S. Air Forces in Europe, he is credited with helping to avert a nuclear war with the Soviet Union during the Able Archer 83 war scare. Perroots died on January 29, 2017, at the age of 83 following a short illness.

Other Resources About Leonard H. Perroots

What Schools Are Affiliated With Leonard H. Perroots?

Leonard H. Perroots is affiliated with the following schools: