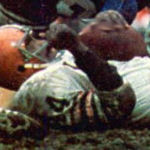 Why Is Leroy Kelly Influential?

According to Wikipedia, Leroy Kelly is a former American football player. A Pro Football Hall of Fame running back, he played for the Cleveland Browns in the National Football League from 1964 to 1973. Career Kelly had attended Simon Gratz High School in Philadelphia and Morgan State University in Baltimore. He was selected by the Browns in the eighth round of the 1964 NFL Draft. As a Cleveland rookie he was a key return man, averaging 24.3 yards per return and contributing to the Browns' 1964 NFL championship, and backup running back behind featured fullback Jim Brown and blocking halfback Ernie Green. He moved up to become the Browns' featured running back after Brown's retirement at the end of the 1965 season.

Other Resources About Leroy Kelly

What Schools Are Affiliated With Leroy Kelly?

Leroy Kelly is affiliated with the following schools: