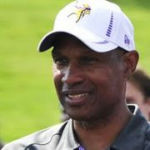 Why Is Leslie Frazier Influential?

According to Wikipedia, Leslie Antonio Frazier is an American football coach and former cornerback who is the assistant head coach & defensive coordinator for the Buffalo Bills, of the National Football League . He previously served as the head coach of the Minnesota Vikings from 2010 to 2013 and previously served as an assistant coach for the Baltimore Ravens, Tampa Bay Buccaneers, Indianapolis Colts, Cincinnati Bengals and Philadelphia Eagles.

Other Resources About Leslie Frazier

What Schools Are Affiliated With Leslie Frazier?

Leslie Frazier is affiliated with the following schools: