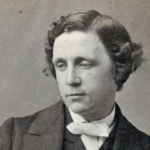 Why Is Lewis Carroll Influential?

According to Wikipedia, Charles Lutwidge Dodgson , better known by his pen name Lewis Carroll, was an English author, poet and mathematician. His most notable works are Alice's Adventures in Wonderland and its sequel Through the Looking-Glass . He was noted for his facility with word play, logic, and fantasy. His poems Jabberwocky and The Hunting of the Snark are classified in the genre of literary nonsense.

Other Resources About Lewis Carroll

What Schools Are Affiliated With Lewis Carroll?

Lewis Carroll is affiliated with the following schools:

What Are Lewis Carroll's Academic Contributions?

Lewis Carroll has made the following academic contributions: