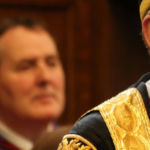 Why Is Liam Donaldson Influential?

According to Wikipedia, Sir Liam Joseph Donaldson is a British doctor. He was formerly the Chief Medical Officer for England, being the 15th occupant of the post since it was established in 1855. As such, he was principal advisor to the United Kingdom Government on health matters and one of the most senior officials in the National Health Service .

Other Resources About Liam Donaldson

What Schools Are Affiliated With Liam Donaldson?

Liam Donaldson is affiliated with the following schools: