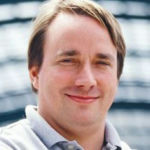 Why Is Linus Torvalds Influential?

Torvalds is world-famous for designing and developing the open-source Linux operating system. Born in Finland, Torvalds attended the University of Helsinki and received his master’s in Computer Science in 1996. Torvalds academic pursuits were temporarily suspended upon joining the Finnish Army, where he held the rank of Second Lieutenant. After his service, he began conceptualizing a scaled-down version of the massive UNIX operating system, which is still used for computer servers worldwide, and is the basis even for the Android operating system used in smartphones. His brainchild, Linux, came out in 1991 as an open-source alternative to UNIX or Microsoft Windows and MS-DOS. Linux was a major hit among the open-source community, made possible by Torvald’s tireless efforts developing and promoting the system for developers, companies, and end users. His master’s thesis, now quite famous, was titled Linux: A Portable Operating System.

In 1999, Red Hat and VA Linux, companies who commercialized the Linux operating system he developed, offered Torvalds stock options and rewarded him financially for his major contribution to the open source software community. Torvalds is one of the major names in all of open source software. As he puts it “open source is the only right way to do software.” His creation with Linux is now recognized around the world as a powerful alternative to major commercial operating systems.

According to Wikipedia, Linus Benedict Torvalds is a Finnish-American software engineer who is the creator and, historically, the main developer of the Linux kernel, used by Linux distributions and other operating systems such as Android. He also created the distributed version control system Git and the scuba dive logging and planning software Subsurface.

Other Resources About Linus Torvalds

What Schools Are Affiliated With Linus Torvalds?

Linus Torvalds is affiliated with the following schools: