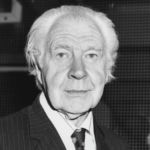 Why Is Lionel Robbins Influential?

According to Wikipedia, Lionel Charles Robbins, Baron Robbins, was a British economist, and prominent member of the economics department at the London School of Economics . He is known for his leadership at LSE, his proposed definition of economics, and for his instrumental efforts in shifting Anglo-Saxon economics from its Marshallian direction. He is famous for the quote, "Humans want what they can't have."

Other Resources About Lionel Robbins

What Schools Are Affiliated With Lionel Robbins?

Lionel Robbins is affiliated with the following schools: