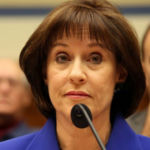 Why Is Lois Lerner Influential?

According to Wikipedia, Lois Gail Lerner is an American attorney and former United States federal civil service employee. Lerner became director of the Exempt Organizations Unit of the Internal Revenue Service in 2005, and subsequently became the central figure in the 2013 IRS targeting controversy in the targeting of politically-aligned groups, either denying them tax-exempt status outright or delaying that status until they could no longer take effective part in the 2012 election. On May 10, 2013, in a conference call with reporters, Lerner apologized that Tea Party groups and other groups had been targeted for audits of their applications for tax-exemption. Both conservative and liberal groups were scrutinized. Only three groups — all branches of the Democratic group Emerge America — had tax exemptions revoked. Lerner resigned over the controversy. An investigation by the U.S. Department of Justice and Federal Bureau of Investigation, completed in 2015, found "substantial evidence of mismanagement, poor judgment and institutional inertia" but "found no evidence that any IRS official acted based on political, discriminatory, corrupt, or other inappropriate motives that would support a criminal prosecution."

Other Resources About Lois Lerner

What Schools Are Affiliated With Lois Lerner?

Lois Lerner is affiliated with the following schools: