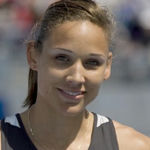 Why Is Lolo Jones Influential?

According to Wikipedia, Lori Susan "Lolo" Jones is an American hurdler and bobsledder who specializes in the 60-meter and 100-meter hurdles. She won three NCAA titles and garnered 11 All-American honors while at Louisiana State University. She won indoor national titles in 2007, 2008, and 2009 in the 60-meter hurdles, with gold medals at the World Indoor Championship in 2008 and 2010. In bobsled, she won the 2021 IBSF World Championships as the brakewoman for Kaillie Humphries.

Other Resources About Lolo Jones

What Schools Are Affiliated With Lolo Jones?

Lolo Jones is affiliated with the following schools: