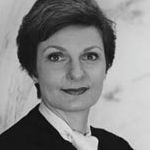 Why Is Loretta Preska Influential?

According to Wikipedia, Loretta A. Preska is an American federal judge who is currently a senior U.S. District Judge of the United States District Court for the Southern District of New York. Born in Albany, Preska received law degrees from Fordham University School of Law and New York University School of Law. She practiced law in New York City from 1973 to 1992 at the law firms of Cahill Gordon & Reindel and Hertzog, Calamari & Gleason . President George H. W. Bush appointed her to the district bench in 1992. She served as chief judge of the court for a seven-year term from 2009 to 2016, and took senior status in 2017. President George W. Bush nominated Preska to the U.S. Court of Appeals for the Second Circuit in 2008, but the Senate did not act on the nomination.

Other Resources About Loretta Preska

What Schools Are Affiliated With Loretta Preska?

Loretta Preska is affiliated with the following schools: