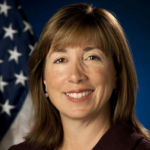 Why Is Lori Garver Influential?

According to Wikipedia, Lori Beth Garver is the former Deputy Administrator of the National Aeronautics and Space Administration . She was nominated on May 24, 2009, by President Barack Obama, along with Charles Bolden as NASA Administrator. She was confirmed by the United States Senate by unanimous consent on July 15, 2009. She left the position in September 2013 to become General Manager of the Air Line Pilots Association.

Other Resources About Lori Garver

What Schools Are Affiliated With Lori Garver?

Lori Garver is affiliated with the following schools: