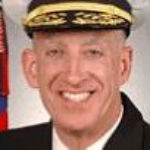 Why Is Louis Iasiello Influential?

According to Wikipedia, Rear Admiral Fr. Louis V. Iasiello, OFM, USN is a Roman Catholic priest, and is a retired American Navy officer who served as the 23rd Chief of Chaplains of the United States Navy from 2003 to 2006. He is a well known Just War theorist, and his PhD dissertation is entitled: Jus in Bello: Key Issues for a Contemporary Assessment of Just Behavior in War. For 18 months after his retirement from the Navy, he was the president of Washington Theological Union. He accepted a position as a Professor of Humanities at Pontifical College Josephinum in Columbus, Ohio, in 2010.

Other Resources About Louis Iasiello

What Schools Are Affiliated With Louis Iasiello?

Louis Iasiello is affiliated with the following schools: