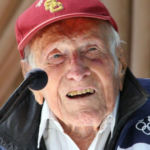 Why Is Louis Zamperini Influential?

According to Wikipedia, Louis Silvie Zamperini was an American World War II veteran and an Olympic distance runner. He took up running in high school and qualified for the United States in the 5,000 m race for the 1936 Berlin Olympics, finishing 8th while setting a new lap record in the process.

Other Resources About Louis Zamperini

What Schools Are Affiliated With Louis Zamperini?

Louis Zamperini is affiliated with the following schools: