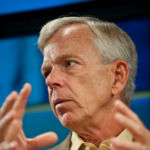 Why Is Lowell McAdam Influential?

According to Wikipedia, Lowell Clayton McAdam is an American businessman. He is the former chairman and CEO of Verizon Communications, a company he joined in 2000. Early life McAdam earned a bachelor's degree in engineering from Cornell University and a master's degree in business administration from the University of San Diego.

Other Resources About Lowell McAdam

What Schools Are Affiliated With Lowell McAdam?

Lowell McAdam is affiliated with the following schools: