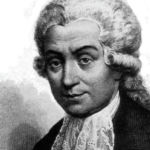 Why Is Luigi Galvani Influential?

According to Wikipedia, Luigi Galvani was an Italian physician, physicist, biologist and philosopher, who studied animal electricity. In 1780, he and his wife Lucia Galeazzi Galvani discovered that the muscles of dead frogs' legs twitched when struck by an electrical spark. This was an early study of bioelectricity, following experiments by John Walsh and Hugh Williamson.

Other Resources About Luigi Galvani

What Schools Are Affiliated With Luigi Galvani?

Luigi Galvani is affiliated with the following schools: