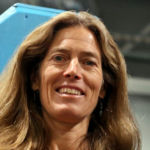 Why Is Lynn Hill Influential?

According to Wikipedia, Carolynn Marie Hill is an American rock climber. Widely regarded as one of the leading competitive climbers, traditional climbers , sport climberss, and boulderers in the world during the late 1980s and early 1990s, she is famous for making the first free ascent of the difficult sheer rock face of The Nose on El Capitan in Yosemite Valley, and for repeating it the next year in less than 24 hours. She has been described as both one of the best female climbers in the world and one of the best climbers of all time. One of the first successful women in the sport, Hill shaped rock climbing for women and became a public spokesperson, helping it gain wider popularity and arguing for sex equality. Hill has publicized climbing by appearing on television shows and documentaries and writing an autobiography, Climbing Free: My Life in the Vertical World.

Other Resources About Lynn Hill

What Schools Are Affiliated With Lynn Hill?

Lynn Hill is affiliated with the following schools: