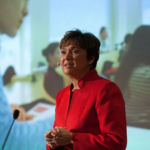 Why Is Lynn Pasquerella Influential?

According to Wikipedia, Lynn C. Pasquerella is an American academic and the 14th president of the American Association of Colleges and Universities. Before she assumed this position, she was the 18th president of Mount Holyoke College in South Hadley, Massachusetts, serving from 2010 to 2016. She was a professor of philosophy at the University of Rhode Island for 19 years before becoming URI's Associate Dean of the Graduate School. From 2006 to 2008 she was vice provost for research and dean of the graduate school at the University of Rhode Island. She was the Provost of the University of Hartford from 2008-10. She also currently serves as the President of the Phi Beta Kappa Society.

Other Resources About Lynn Pasquerella

What Schools Are Affiliated With Lynn Pasquerella?

Lynn Pasquerella is affiliated with the following schools: