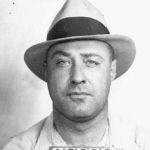 Why Is Machine Gun Kelly Influential?

According to Wikipedia, George Kelly Barnes , better known by his pseudonym "Machine Gun Kelly", was an American gangster from Memphis, Tennessee, active during the Prohibition era. His nickname came from his favorite weapon, a Thompson submachine gun. He is best known for the kidnapping of the oil tycoon and businessman Charles F. Urschel in July 1933, from which he and his gang collected a $200,000 ransom . Urschel had collected and left considerable evidence that assisted the subsequent FBI investigation, which eventually led to Kelly's arrest in Memphis, Tennessee, on September 26, 1933. His crimes also included bootlegging and armed robbery.

Other Resources About Machine Gun Kelly

What Schools Are Affiliated With Machine Gun Kelly?

Machine Gun Kelly is affiliated with the following schools: