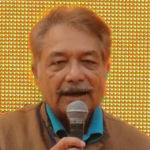 Why Is Madhu Rye Influential?

According to Wikipedia, Madhu Rye is a Gujarati playwright, novelist and story writer. Born in Gujarat and educated at Calcutta, he started writing in the 1960s and became known for his stories and plays. His experience at the University of Hawaii introduced him to experimental writing and improvisations as writing aid, which later led to a movement against absurd theatre. He moved to the US in 1974 and has lived there since. He chiefly wrote novels, short stories and plays. His plays were successful and have been adapted into several languages and media. He has adapted his novels into plays and some plays into novels. The most notable is Kimball Ravenswood, which was loosely adapted into a Hindi TV series Mr. Yogi , and a Hindi film, What's Your Rashee? .

Other Resources About Madhu Rye

What Schools Are Affiliated With Madhu Rye?

Madhu Rye is affiliated with the following schools: