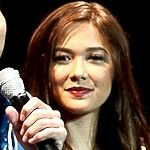 Why Is Maja Salvador Influential?

According to Wikipedia, Maja Ross Andres Salvador is a Filipino actress, dancer, singer, host, producer, and talent manager. She is currently self-managed by her own talent agency, Crown Artist Management. Prior to the sudden shutdown of ABS-CBN, she was under the management of ABS-CBN's Star Magic. In 2011, Salvador co-produced and portrayed the title role in the film Thelma, which earned her the Gawad Urian Award and the Film Academy of the Philippines Award for Best Actress.

Other Resources About Maja Salvador

What Schools Are Affiliated With Maja Salvador?

Maja Salvador is affiliated with the following schools: