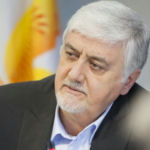 Why Is Majid Ghassemi Influential?

According to Wikipedia, Majid Ghassemi is an Iranian banker, business magnate, and investor. Ghassemi originally established his reputation as the governor of Central Bank of the Islamic Republic of Iran, from 1986 to 1989.

Other Resources About Majid Ghassemi

What Schools Are Affiliated With Majid Ghassemi?

Majid Ghassemi is affiliated with the following schools: