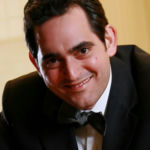 Why Is Malek Jandali Influential?

According to Wikipedia, Malek Jandali is a German-born Syrian-American pianist and composer. He is the founder of the nonprofit organization Pianos for Peace, which aims to build peace through music and education. Jandali immigrated to the United States and studied music in North Carolina. Since then, he has performed with orchestras across the world and composed a number of modern classical works. His music was described as "a major new addition to the 21st century symphonic literature" by Fanfare Magazine with "heart-rending melodies, lush orchestration, clever transitions and creative textures", according to American Record Guide. Jandali's music ranges from chamber works to large symphonic compositions integrating Middle-Eastern and Western influences.

Other Resources About Malek Jandali

What Schools Are Affiliated With Malek Jandali?

Malek Jandali is affiliated with the following schools: