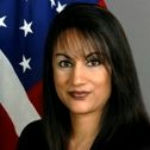 Why Is Manisha Singh Influential?

According to Wikipedia, Manisha Singh is an American attorney and government official who served as assistant secretary of state for economic and business affairs in the Trump administration until January 20, 2021. She previously also served as acting under secretary of state for economic growth, energy, and the environment. In April 2020, President Donald Trump announced his intent to nominate Singh to be the next United States representative to the Organization for Economic Cooperation and Development, with the rank of ambassador. On January 3, 2021, her nomination was returned to the President under Rule XXXI, Paragraph 6 of the United States Senate.

Other Resources About Manisha Singh

What Schools Are Affiliated With Manisha Singh?

Manisha Singh is affiliated with the following schools: